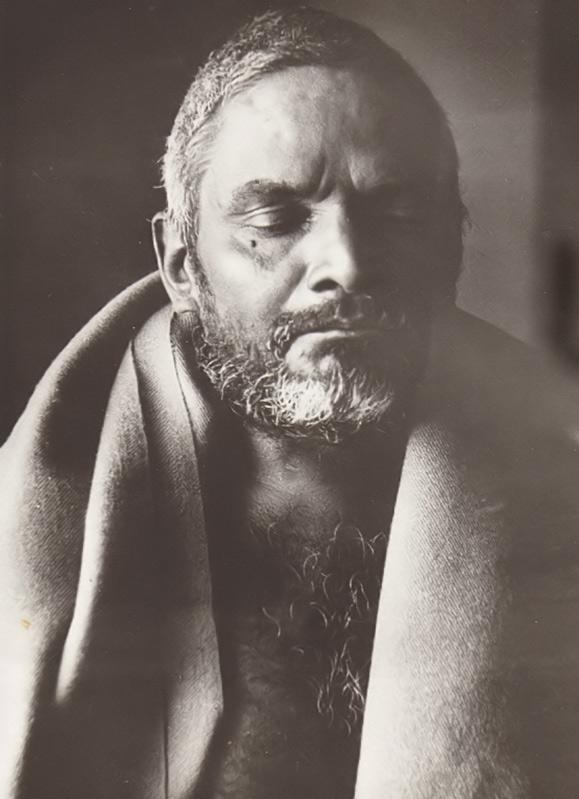 Who was Nityananda actually?

Monthly at the Full Moon, Kabira presents a Shaktipat Ceremony. The ceremony is devoted to Bhagavan Nityananda, who’s picture is presented at the altar.

During the ritual we welcome his wisdom, guidance and support into the space.

But, who was this Bhagavan (litt. Lord or Blessed One) actually?

EARLY YEARS
Details about the early childhood of Nityananda are relatively unknown.
Most likely he was born around 1897 in Kerala. He was found as an abandoned baby in a basket in the farm fields, some say with snakes coiling around him. He was adopted by a farming couple, the Nairs, who took him in alongside 5 other siblings and called him Raman. Even in childhood, Bhagawan Nityananda seemed to be in an unusually advanced spiritual state, which rendered him the name Nityananda – He who is always in Bliss.

When both his foster parents passed away at age 3 and 6, he lived with their employer, a wealthy lawyer called Ishwara Iyer. Iyer was an enlightened yogi who had mastered austerities. Nityanda’s disciple Muktananda would later proclaim that Iyer was his first guru. Nityananda lived in his house, would wash the dishes, and sweep the floor. At his passing away in Nityananda’s teenage years, , he started traveling and became a wandering yogi, studying scriptures.

He travelled by foot, lived in solitude and story goes that he performed miracles along the way, which he actually never took ownership of. Some say Nityananda lived in the Himalayas in a tree top for 6 years, others say that he has roamed through India.

Most stories tell that he appeared back as a young man in southern India, in a place called Guruvan (trs. guru’s forest), near Kanhangad, Kerala. Which would later become a pilgrims location.

Nityananda arrived to the Tansa valley in Maharastra around 1923. He built resthouses, a clinic, a school, a well and restored the hot springs around Vajreshwari and Akloli. Supporting the local Indian tribe Adivasis, who were despised by most of the population.

As Nityananda arrived to Ghaneshpuri in 1936, he went into the Shiva Temple, asking for a simple hut to rest his head. The family running the temple welcomed him in. And as he received more visitors, the hut transformed into an ashram.

He spent the last 25 – 30 years of his life in Ganeshpuri, close to Vajreshwari and Alkloli. Supporting local community by providing food, schools and building the first hospital in Ghanespuri.

As he prepared himself for his mahasamaddhi (passing of the body) in 1961, he said:

“Everyone comes here for money and only money.
The more they are given, the more they seek; there is no end to their greed.
When they come they are pedestrians sometimes without a proper dwelling place; and when they get the necessities, then comforts and luxuries are demanded: a car, a bungalow, and so on.
When earlier prayers are granted in the hope that contentment would follow and that they would then seek higher values, another demand is placed in a never-ending series of wants and desires.
Not much point in allowing this body to continue— hence samadhi tomorrow.”

HIS PERSONALITY
He was famous for his love for children (whom he would give free meals in the morning). He would eat simple food and speak very little, mostly mumble.
He was most years surrounded by people meditating and in silence. He would wear a simple loincloth, and enjoy walking around for hours. He never looked at people directly, but gazed inward, eyes half open.
He wouldn’t pay much attention to the gifts he received, or acts of worship. When people would come and sit next to him to start a conversation, he would often just turnover and snortingly fall asleep. At times he would lose his temper, especially when he believed people were not serious in their spiritual practice or would have ulterior motives. When his disciple Muktananda visited him proclaiming: “I Surrender to You”, he simply said: “Go way”. A breakthrough for his successor Muktananda.
When seekers told him to write books he said: “What the poet-saints Nrada, Mira, Kabir, Tulsidas, and others have said is just what I have said. It is not necessary for me to say any more.”

He suffered from rheumatic arthritis in his hands and feet. Just a few moments before he left his body, his fingers and hands completely stretched out, as in peaceful relaxation.

“I am Everything,
Everything is in me”

THE LINEAGE AND TRADITION
Sages define 3 types of siddhi’s, paranormal powers.  One is acquiring impure powers through unclean vows and incantations. The second are mantra siddhi’s, acquired by saying a mantra under certain conditions to a particular deity, leading to miracles (e.g. manifesting or moving objects). The third are true siddhi’s as described in scriptures. These powers are acquired by practising the 8 limbs of ashtanga yoga through concentration, abstinence, physical practise and rigorous discipline.

Beyond al three there is a supreme power, mahasiddhi, which is not acquired by one’s own effort, but is received as a gift from god. The gift is always presence, a divine presence. These powers do not require you to perform austerities, engage in rituals or make vows. You might not even realize you have them. They manifest in their own accord and perform service to the people around you.

There is a powerful tradition of guru’s called the Siddha Yoga Tradition. The master can touch a disciple or just point a finger at him, and thereby set in motion the process of Siddha Yoga. In Siddha yoga you don’t have to do yoga, it happens spontaneously within. This yoga that happens by itself is called Siddha Yoga. Japa (repetition of a mantra), discipline, Pranayama (breath exercise) and asanas (practising postures) are automatically included. Nityananda was part of this tradition.

HIS TEACHINGS
Most people would come and meditate with Nityananda, sitting silently, receiving darshan (descent of grace), through his presence. He would not speak much.
Over the years, one of his students wrote down his teachings in a book called the Chidakash Gita.

Nityananda would not preach or lecture, but the brief messages, or instructions (e.g. reciting of mantras) he gave in person and in dreams were full of power. Most people would miraculously receive the answers to their questions already before visiting, or issues would automatically be resolved while in his presence.

He would recommend different paths to different seekers, depending on their temperament and capacity. “You can finish your journey like this – within a fraction of a second.” Yet, he did treat everybody equally and said: “Have the same feeling of love for everyone, as you have for your own self”.

He would welcome the world as a divine play of consciousness. “The universe is infinite, and it is your own self. See the world as a form of the inner self. The world is not separate from the world. This is Vedanta, this is devotion, and this is worship. Dwelling right within you is your own lord.”
When people asked him to show God to them, he would say: Yes, he is within you. Go there.” Or, “Just look around. Everyone is god. Everyone is god.”

With meditation, and calming the mind, at the core. “Search inside of yourself.” “God is the witness of your mind.” “When the mind is there, the person is an ordinary human being. When the mind has been transcendent, a person becomes a great being, a saint”

In short, the teaching can be captured in essence through a simple phrase:
“The heart is the hub of all sacred places, go there and roam.”
An understanding that most people experienced in the Shaktipat.